Less than 10 % of the time appears to be what is acceptable to the healthcare system.

This figure is based on the status quo. In 2006-07, an average of 8.2 % of patients admitted to public hospitals used PHI (essentially rural/remote patients with limited choice and certain specialists who need to work in a public facility). As that figure has increased over time, reaching 13.5 % nationally in 2017-18, it has become a topic of concern, regularly debated and considered unsustainable#. 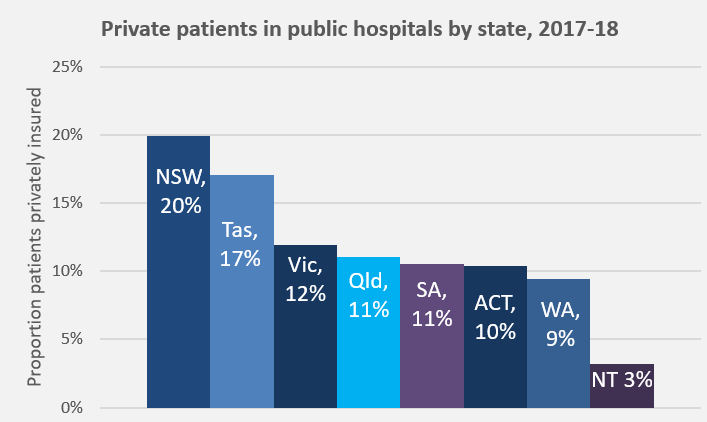 Unfortunately, individual patient needs do not really feature in the discussions. Analyses of which type of patients, procedures, and waiting times have contributed to the increase, and reporting of coercive techniques being used on patients to elect PHI, all point back to assumed financial benefit as the driver.

Public hospitals welcome private patients as they bring funds from an alternate source, and hence save money in their budgets. However, according to a 2018 Report by Martyn Goddard on Tasmanian public hospitals, ‘for each patient admitted as private, the public hospital loses an average of $1,800, compared with treating the same patient publicly‘. He notes that it is a myth that private patients contribute additional funds into public hospitals because the hospital only gets PHI payment for the treatment (that does not cover infrastructure, administration, catering etc. costs) and the Federal Government does not  fund these patients with the usual percent of the national efficient price, on the basis that it already pays for Medicare and the private insurance rebate. So the hospital gets only a fraction of the usual activity-based funding**. 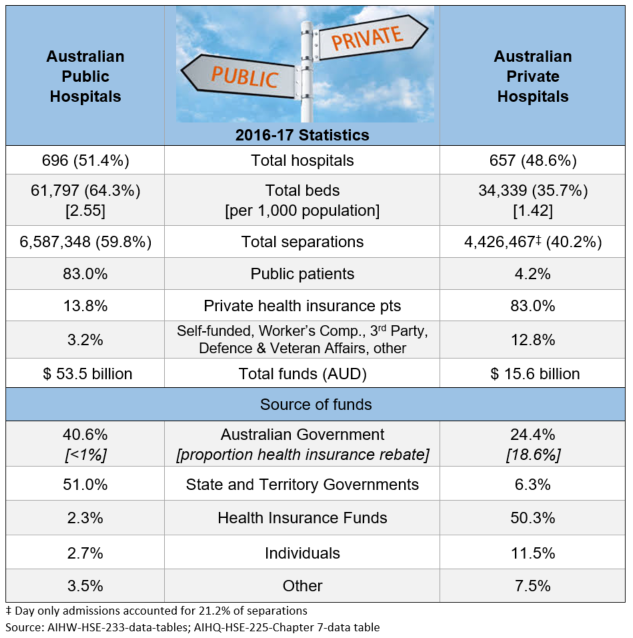 Patients think they are doing the right thing by using their PHI and assisting the public system to free up resources to treat more public patients or conduct research. However, they actually open themselves up to additional costs via excess/co-payments and out-of-pockets from gap specialist charges.

Whatever the altruistic motivations of this cost-shifting to the private sector, it results in  upward pressure on insurance premiums. This then sets off a sequence of events to rival ‘Mouse Trap’, except everyone seems to get caught with the cheese at the end.  When PHI premiums go up, people drop their private health insurance. These people then rely on the public health system and the health insurance rebate age penalty actively works against them opting back into private insurance at a later date.

The more privately insured people who use their cover in public hospitals, then the less beds are available for public patients and waiting times go up in the public hospital system producing a political issue for both State and Federal Governments. Some public patients are shunted to private facilities (this already happens at a pretty constant rate of 4% of separations per annum).

In reality, these are no true private hospitals, rather a symbiotic relationship exists between public and private across the Australian healthcare system. The table shows that PHI accounted for 50.3 % of private hospital funding in 2016-17. A further 30 % coming from Federal and State Governments, including Medicare payments for medical services and the private health insurance rebate.

#According to numerous reports (Private Health Australia 2019 pre-budget submission; Catholic Health Australia 2016 discussion paper; Victoria Auditor-General’s Report 2019; Dept of Health 2017 Consultation discussion paper ) and a 2017 Senate enquiry.
**The National Health Reform Agreement requires IHPA to set the price for admitted private patients in public hospitals accounting for these payments by other parties, particularly private health insurers (for prostheses and the default bed day rate) and the Medicare Benefits Schedule (MBS). Documentation of revenue received for delivering care from sources other than through the (i.e. public patients in a public hospital) is not consistent and a correction factor has been introduced as an interim step.
Image source
https://tacshealthcare.com.au/wp-content/uploads/2019/03/Pssst.jpg 450 800 YeeHar https://tacshealthcare.com.au/wp-content/uploads/2018/04/TACS-Healthcare-No_Icon_Large-1.png YeeHar2019-06-30 14:10:212019-11-11 09:45:57Should you go private?