MyHealthyCommunities is an Australian Government website managed by the Australian Institute of Health and Welfare (AIHW). The public availability of statistics and data at a local Primary Health Network (PHN) is meant to drive improvements, increase transparency and accountability within the health system.

Data for more than 140 measures by PHN area are updated regularly. The categories, shown below, align with health priorities.

Interactive tools allow you to filter on characteristics, time period and location. Available data can be downloaded as maps or as an Excel spreadsheet.

A recent report on Out of Pocket spending on Medicare services in 2016-17 quantified what we all know from our trips to the GP or specialist with half of all patients (10.9 million people) incurring out-of-pocket (OOP) costs for non-hospital Medicare services last financial year. OOP were paid by:

The data and user friendly graphics are easily accessible. In addition to the 31 PRNs, results are presented for smaller local areas, known as SA3s, of which there are approximately 300. Have a look at the Excel download to get an appreciation of the depth of the data. Below is the landing screen for  the new interactive web tool which allows you to see variation across similar local areas by remoteness and socioeconomic status.

Another great initiative well executed by the AIHW. 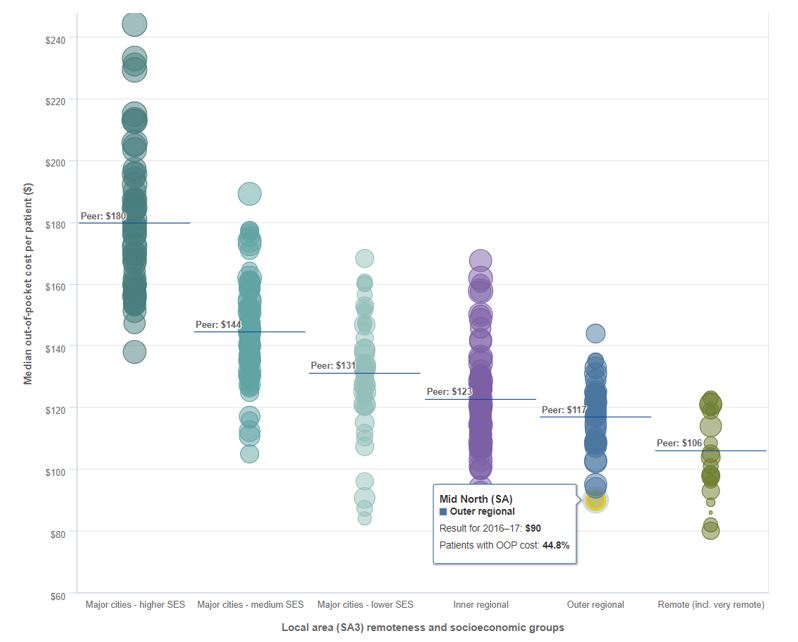 The development of primary care organisations since the 1980s is based on evidence that a well-developed primary care model improves health outcomes and cost-effectiveness in the whole healthcare system. A key being their increasing use to implement public health care reforms including shifting services away from hospital settings and into the community.

Primary healthcare in Australia is provided mainly by independent general practitioners (GP) on a fee-for-service basis, predominantly funded by the Australian Government through Medicare. Over 80% of GP services are bulk-billed, with the doctor accepting a Government reimbursed schedule fee as full payment. There is no system of patient registration with a GP or practice, and patients may consult any GP.

The first major structural reform in Australian primary care was the establishment of Divisions of General Practice from 1992.  At their zenith, there were 119 nationally with 94% of GPs as members. Additional reforms included a practice incentive programme to improve quality and accountability of GP services such as paying for immunisations and prescribing reviews; a rural incentives programme that includes paying GPs to relocate to and stay in rural and remote communities and outer urban areas; and amendments to the fee schedule that encourage participation in care planning and case conferencing and more multidisciplinary care.

In 2008, the then Labor government established the National Health and Hospital Reform Commission (NHHRC) to conduct a comprehensive review of Australia’s health system. The final report  gave rise to the Council of Australian Governments’ (COAG) National Health Reform Agreement (2011). The Commonwealth Government agreed to fund a new primary healthcare structure to improve coordination and integration of primary health care in local communities, address service gaps, and make it easier for patients to navigate their local health care system.

The establishment of 61 Medicare Locals across Australian regions aimed to strengthen the primary care system (and thereby relieve pressure on hospitals and other acute providers). Medicare Locals were non-profit companies selected after a competitive application process and funded largely by the Commonwealth with $1.8 billion for the period 2011–12 to 2015–16.

Many GPs saw the new structures as a threat to their primacy in their local primary care market and an unnecessary additional layer of bureaucracy. This negative view was reinforced by the Australian Medical Association, that lobbied the Coalition Opposition on the basis of the perceived threat to the GP small businesses. 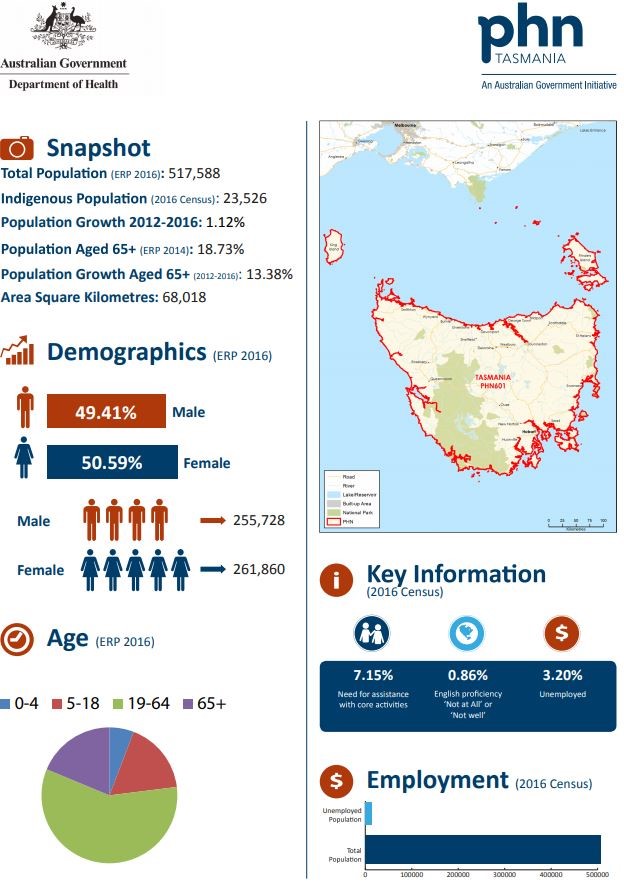 Not surprisingly, soon after coming into office, the new Minister for Health, Peter Dutton, announced a review of Medicare Locals. Conducted by Professor John Horvath, assisted by two consulting firms, the review informed the 2014-15 Budget announcement that all Medicare Locals would cease operation on 30 June 2015 and a new network of Primary Health Networks (PHNs) would be established.

Despite the significant costs associated with winding up the relatively recently established Medicare Locals, and a poorly managed public tender process, on 1 July 2015, 31 PHNs, funded by approximately $900 million, replaced the Medicare Locals.

PHNs are independent organisations funded by the Australian Government. They work collaboratively with local hospital networks (LHNs), and their boundaries closely align. Each PHN is overseen by a board. The board is advised by a GP-led clinical council and a community advisory committee.

An example snapshot of Tasmanian PHN is provided. Refer to the PHN website for further information and links to individual PHNs.

While the internet is fantastic for providing access to information on any topic at any time of the day, sometimes, particularly when it comes to health issues, knowing a trustworthy source is invaluable. For Australians, healthdirect aims to be this resource.

Established by the Council of Australian Governments (COAG) in 2006 and jointly funded by the Commonwealth and State/Territory governments, healthdirect Australia is a national, not-for-profit organisation that provides approved health information to Australian consumers.

The infographic below from the 2016-2017 Annual Report would attest that the site is achieving its aim. 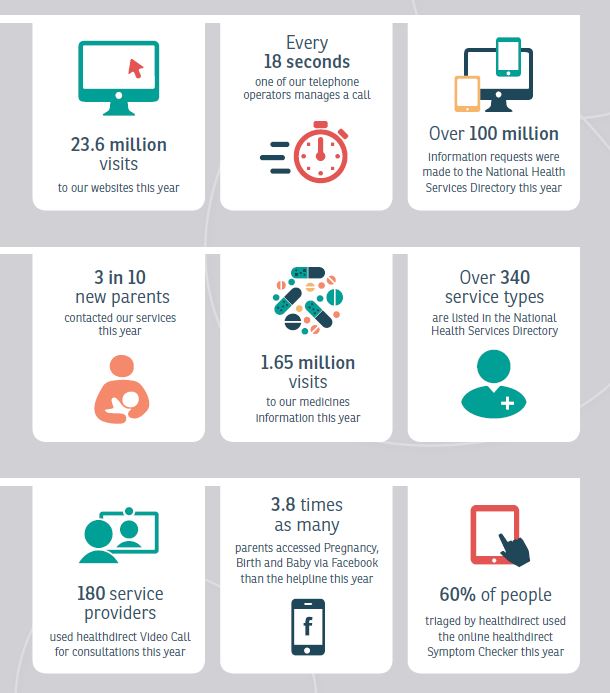 In addition to site visits for medicines information, the second most common reason for calls to the healthdirect helpline (1800 022 222) was to ask a medication question.

The medicines information provided is sourced from the Therapeutic Goods Administration (TGA), Pharmaceutical Benefits Scheme (PBS) and Guildlink and updated monthly, although a pilot of real-time distribution is underway for some components.

For those around the industry in 1991, the Baume report recommended, among other major changes to the regulatory process, that pharmaceutical companies provide a Consumer Medicines Information (CMI) leaflet in the primary pack, or by other means, for prescription products. To avoid the issue of frequent revisions, Guildlink evolved from a collaboration with members of Medicines Australia.  Electronic distribution of CMIs commenced in 1995, via the website medicines.org.au and now via multiple other channels.

The next logical step will be personalised distribution via My Health Record.

The August 2018 edition of the Australian Journal of Pharmacy includes a report card for the Sixth Community Pharmacy Agreement (6CPA) which came into effect on 1 July 2015.

In addition to these initiatives, last year the 6CPA was varied via signing of a Compact between the Pharmacy Guild and the Government. In response to changed circumstances, the Pharmacy Guild successfully negotiated the additional funding shown above in return for agreeing to support ongoing PBS price reform, biosimilar uptake measures, and a role in implementation of Health Care Homes. These three being critical components of other ‘landmark’ agreements forged by the Minister of Health. An impressive outcome for both parties!