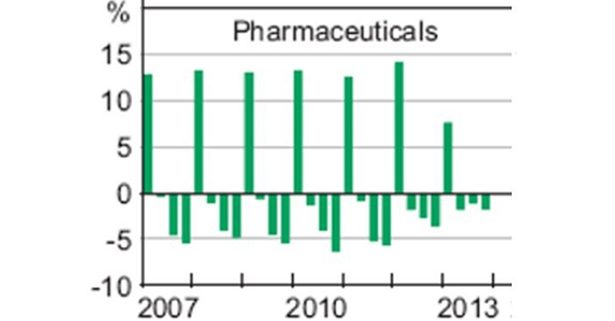 The Australian Bureau of Statistics (ABS) Consumer Price Index (CPI) Mar 2018 summary notes a +5.6% increase in the price of pharmaceutical products as contributing to the overall +0.4% rise reported for the quarter. The CPI is the official measure of inflation in the Australia economy and is the non-seasonally adjusted ‘All groups CPI’ weighted average of prices paid for goods and services in eight capital cities.

The CPI is made up of 11 expenditure groups weighted by household spending patterns to produce aggregate measures of price change. Traditionally, these weights have been sourced from the ABS Household Expenditure Survey and updated every 6 years. Housing and Food and non-alcoholic beverages groups are the two most significant components of household expenditure.

Pharmaceutical products are included in the Health group together with costs associated with medical and hospital services, and private health insurance premiums. The detailed ABS report for the March 2018 quarter reveals that the rises observed in pharmaceuticals, +5.6% (and medical and hospital services, +1.5%) are due to the decrease in the proportion of patients who qualify for safety net thresholds under the Pharmaceutical Benefits Scheme (PBS) and Medicare Benefits Scheme (MBS), respectively. This is due to the annual January 1 reset of threshold amounts for the PBS and MBS, as well as co-payment indexation for PBS.

This phenomenon shows why seasonally adjusted CPI figures are also presented. The included graph clearly shows a positive increase in spend on pharmaceuticals in the first quarter of each year. Note: the Mar 2017 CPI rise in pharmaceuticals was +4.9%. Seasonal adjustments are made to control for this type of systematic, calendar related event.

After seasonal adjustment, the Health group household expenditure in Q1, 2018 grew by +0.8% with the main contributor being medical and hospital services. The weighting of the Health group within the CPI has been increasing over time. In the most recent readjustment the group weight rose to 5.43%, although certain population subgroups, namely self-funded retirees and age pensioners are spending over 10% of household expenditure on health.

The weighting rise was driven by medical and hospital services, following increases in private health insurance premiums over the relevant period. This rise was noted to have been partially offset by a fall in the expenditure share of pharmaceutical products. Clearly, the price of pharmaceuticals in Australia has not been rising, but actually decreasing over time.