The newly released AIHW Report on Gastrointestinal Cancers is the first time Australia-wide data, specific to gastrointestinal-tract cancers, has been collated. It is the result of collaboration between the AIHW, all state and territory population-based cancer registries and Cancer Australia.

The report is a fantastic resource as it brings together epidemiological, diagnostic and treatment data in a comprehensive way thus providing a full picture for comparison and interpretation. The explanations regarding data sources in the appendices are also very helpful.

The eight upper and lower gastro-intestinal cancers included are shown in the graph below of cases diagnosed, deaths and relative 5-year survival rates.  Colorectal cancer is the most commonly diagnosed, a function of higher incidence and the National Bowel Cancer Screening Program (NBCSP), followed by pancreatic cancer as the second most commonly diagnosed.  These two cancer types are associated with the highest and lowest, 5-year relative survival rates of all gastrointestinal-tract cancers, at 69% and 9%, respectively. 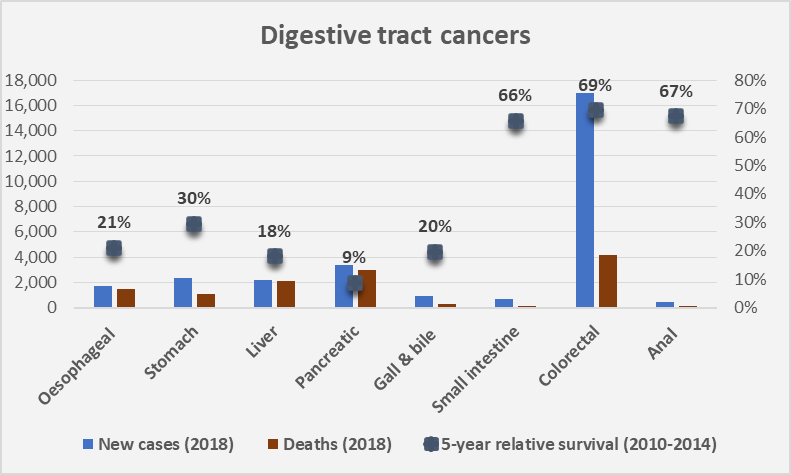 The inclusion of disease Stage at diagnosis enables presentation of data as shown below from the report. Cases of colorectal cancer diagnosed in 2011 and the 5-year relative survival for the period 2011-2016, both reported by disease Stage, clearly demonstrate the impact of early diagnosis on mortality. For people diagnosed with Stage I colorectal cancer, the 5-year survival rate was 99%. Delay diagnosis to Stage IV and this figure becomes 13%.

In 2016–17, the gastrointestinal-tract accounted for approximately 20% of cancer diagnoses, 18% of cancer-related hospitalisations and 27% of chemotherapy procedures in Australia. Further detail on the treatment used at which disease Stage, would be a valuable inclusion in the next iteration of this report.

The majority (92%) of the burden of gastrointestinal-tract cancer was due to premature death. The remainder was associated with diagnosis (such as  biopsy) and primary treatment of the cancer (for example, surgery which may include bowel resection). Long-term effects, such as the use of a stoma with a colostomy bag, also contributes to the non-fatal burden from colorectal cancer in the Australian population.