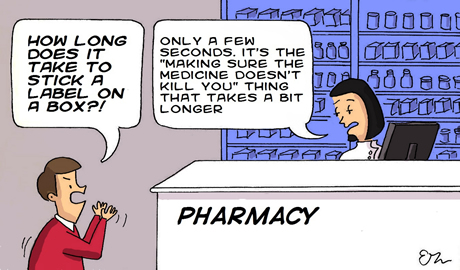 As the purchasing of medicines moves towards a commodity model in Australia, with off-patent (F2) molecules a marketplace, and ‘me too’ R&D programs and associated payer behaviour creating as much in the patent (F1) space, providers all along the supply chain are being impacted.

What are Community Pharmacists, as one of the key groups affected by stagnation of the PBS, doing to remain viable?

The first Community Pharmacy Agreement (CPA) in 1990 between the Commonwealth and the Pharmacy Guild, representing pharmacy owners, introduced a new remuneration framework for pharmacies supplying PBS medicines and created incentives to optimise the distribution of pharmacy services around the country.

Specific programs and services appeared in the third CPA from 2000, and subsequent CPAs have included an ever-increasing number of remunerated clinical activities. These still represent a small proportion of the overall value of the agreement, but offer more revenue with no increase in costs. Hence, in addition to retaining existing components, such as 30-day dispensing, expansion of service programs are a key feature of negotiations of future agreements. Figure 1 shows the average annual dollar amount a pharmacy can expect to generate from the components of each CPA.

This is despite continuation of Government payment for programs being contingent on demonstrating clinical and cost-effectiveness. A 2017 evaluation by HealthConsult was unable to make conclusive assessments on the benefit of Dose Administration Aids, Staged Supply, MedsCheck, Diabetes MedsCheck and Home Medicines Reviews conducted by pharmacists due to a lack of robust data. Further research is required in this, currently, evidence free zone.

The Pharmacy Guild and Instigo initiated the Health Advice Plus program in 2016 to assist pharmacies to maximise the opportunities and revenue afforded by the CPA programs. Based on 1,000 pharmacies, they recently reported that, of those pharmacies : 87 % have a private consultation room; 44 % are maximising their clinical Intervention potential; only 28 % are maximising MedsChecks with an average of 12 a month (up to 20 permitted); 56 % have not reached their DAA cap level (individually calculated based on previous 12 months); and 72 % are currently providing vaccination services.

The Aged Care Royal Commission Interim Report prompted this month’s decision by the COAG Health Council to name “Medicine Safety” as Australia’s 10th National Health Priority Area. The report also notes the need for the Federal Government, Pharmacy Guild and Pharmaceutical Society of Australia (PSA) to consider the effectiveness of the Residential Medication Management Review program and make it stronger and more accessible. A timely opportunity for pharmacy as the 7CPA negotiations continue.

From supply function to pre-primary healthcare

The Guild and PSA have recognised the need to broaden the role of community pharmacy and are actively working to expand the sectors offerings for treatment of minor aliments and preventative health (vaccinations, health checks, risk assessments, self-care, lifestyle issues).

From a policy and revenue perspective, this is also a sweet spot that the Government is prepared to support in the face of a healthcare system showing the strains of an ageing population, increasing prevalence of chronic diseases, higher public expectations and rising costs of new technologies. According to a RACGP report, General Practitioner workloads, inadequate Medicare rebates and decreasing numbers of graduates choosing the speciality, with numbers in training dropping by 20% year on year since 2016, will not see an improvement in the foreseeable future.

This is a gap that community pharmacy is driving to step into. One means is via down scheduling of Prescription Only medicines to Pharmacist Only (a process managed by the TGA) which has the added value to Government of reducing visits to the GP (capacity and expenditure benefit) but also the cost of these medicines moves to the patient’s pocket from the PBS (if listed). Table 1 shows the products most likely to be re-scheduled in the near future.

Meanwhile the debate about extending pharmacists’ scope of practice to include prescribing of Prescription Only medicines continues.

As successive Price Disclosure policies dropped the average price of many frequently dispensed former block buster molecules for chronic conditions, community pharmacies watched their revenue similarly plummet. Coupling payment for completing the same dispensing process to the price of a product was no longer such a good idea. The 6CPA moved compensation for dispensing from a percentage of product value to a flat fee. The Administration, Handling and Infrastructure (AHI) fee has stabilised the impact of price disclosure. Figure 2 shows the impact of this changeover comparing Government payment in the last year of the 5CPA with that in the first of the 6CPA when the AHI was introduced. Unlike PBS listed medicine prices, the AHI is indexed annually.

The 7CPA is due to commence in July 2020. Negotiations continue between the Australian Government, Pharmacy Guild and PSA.

3 Reasons why Medicines Shortages will continue