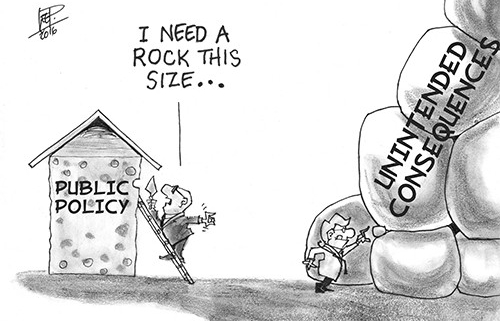 Considering the establishment of a similar program in Canada, where largely private province-based schemes* currently operate, presents an opportunity to consider what is lost when these programs are the sole focus of pharmaceutical policy.

Advocates of such schemes point to cost-effective product selection and savings generated by lower and reducing generic and brand name prices. The principles of universality, equity of access, safe & appropriate prescribing, and value for money are paramount.

The Minister of Health, the Hon Greg Hunt MP, regularly commends the foundation role that the PBS plays in the Australian health system. While such programs have reduced both overall expenditures and the average price paid per drug, like all policies, they often have unforeseen repercussions.

In her recent essay, Kristina Acri examined the potential unintended consequences of a publicly-funded national Pharmacare program in Canada. She reviewed the experience of New Zealand, Australia and United Kingdom to identify those aspects where reality has not matched the promise:

In a similar review, Crosby et al. (2016) discuss that to control spending on universal schemes, access to new drugs is rationed, downward pressure is imposed on prices, and costs are pushed to individuals. They conclude that introducing a universal scheme to Canada would increase public spending, reduce patient choice to only subsidised medicines, delay access to new drugs and lead to inequities in coverage compared to the existing situation.

Globerman and Barua (2019) discuss the impact of the Health Canada proposed amendments to the Patented Medicine Prices Review Board (PMPRB) procedures which will include the evaluation of the cost effectiveness of drugs by CADTH, into the determination of maximum allowable prices for patented drugs. They note that that these changes ‘seem to be focusing more on controlling expenditures on pharmaceuticals than on ensuring that Canadians have access to new therapies’. They advocate for an efficient level of expenditures on pharmaceutical drugs, not simply containing expenditures on those drugs.

‘In principle, cost-efficiency analysis is a technique for comparing the social benefits of a drug relative to its cost.

In practice, the conventional application of the technique arguably leads to an underestimation of the social benefits of new drugs.’

Despite these concerns, last month legislation introduced by Health Canada was passed and paves the way towards a PBS Canadian-style! ‘Government of Canada Announces Changes to Lower Drug Prices and Lay the Foundation for National Pharmacare.’ News Release, August 2019.

*A third of Canadians are covered by public drug plans which vary from province to province. Most are covered through their workplace by private insurance plans. Another 10% of Canadians have no coverage at all (Canadian Health Coalition, 2017).

The fate of ‘fee for service’ GP visits

3 Reasons why Medicines Shortages will continue
Scroll to top